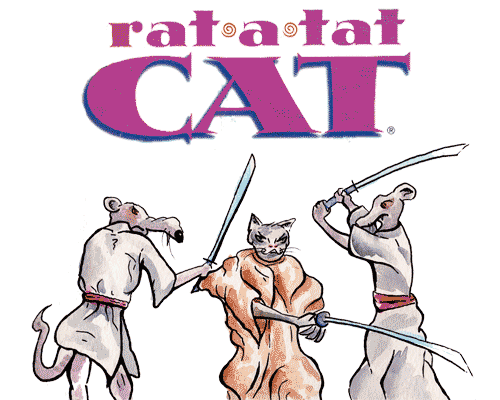 Rat-a-Tat Cat is a great game made by GameWright. As part of our Software Engineering Class at the University of Vermont, we were given the task of rendering their game to be played on the computer. Although the characters and intro art were done by us, the rules (despite slight modifications) as well as all of the card art is the intellectual property of GameWrite, and we give them full credit for it.

The main objective is to have the lowest score at the end of the game. The game ends when either player reaches 60 points. Each game is made up of several rounds. Rounds end when there are no more cards left in the deck, or when a player knocks.

The player gets a chance to peek at the outermost two cards in their spread, then they are hidden again. Power cards can only be activated when they are drawn from the deck.

Each turn, a player has two options:

The player may then swap out the card they have drawn with one of their own cards, or if they drew it from the deck, discard the card. The choice a player makes to swap or discard is based on their recollection of the values of the four cards in front of them. You don't want to replace a low value card already in front of you with a higher value card you swap in.

Power cards have no point value. If you have a power card in your four cards at the end of the game, they are automatically replaced at random from the deck or discard pile. If a Power card is discarded, it may not be used again by any player. There are three kinds of Power card, Peek, Draw Two, and Swap.

After several rounds, one of the players will reach a total of 60 points. When this occurs the game ends, and the player with the lowest score wins.

Take a gander at our project on GitHub!